What is stew anyway? If I quote s. Felicito Kalinsek, it is a group of dishes “in which minced or minced meat (including fish or vegetables) is cooked in a spiced sauce”. Most of us are familiar with veal and beef stew, pork and venison are a little lesser known, fish probably even less so. And, surprisingly, if I look at my new great Slovenian cookbook, which was brought to me by Santa Claus and read it with all my interest, I can’t find a chicken stew recipe there at all. But there is a small sea of ​​thousands of pages. Isn’t there a chicken stew recipe?

Maybe it’s a form of stew? No, stew is not the same as stew. We usually do it with flour – well, at least sometimes we always do, but in the modern world some people are more afraid of flour than wreaths – and a bit rarer, that is with more “water”, and whole pieces of chicken meat are cooked in paprikash. Sometimes (at least here we like it) it is enriched with a base of sweet cream and flour, still elsewhere, especially there towards the border with Hungary, it is served rare almost like soup and absolutely without cream . My father, originally from Strehovec in the municipality of Dobrovnik (almost on the Hungarian border), loved one. And very fat. And it’s the same with veal, rabbit or chicken.

Ragu, on the other hand, is a thick meat sauce with vegetables (usually with carrots, which are not found in paprikash). It is most often seasoned in Bolognese sauce (thyme, oregano, rosemary – probably depending on the region and the type of meat), while marjoram and bay leaf parade in paprikash. But it’s probably increasingly region-dependent here too.

Cut the meat into small pieces, salt and fry over a slightly higher heat so that it does not release too much water. We want it to be juicy in the sauce. That’s why we don’t use lean chicken breasts in the stew, which would work more like sawdust in the sauce, but thigh meat. And we don’t roast garlic first because that would make it bitter. It will give more flavor.

Of course, to cook them al dente. Hardy to bite. Let the jaws work a bit during lunch. Cook them in salted boiling water. For 100 g of dry pasta we need a liter of water and a teaspoon of salt. For a family of four, this represents 400 g of dry pasta, which is cooked in 4 liters of boiling water, to which 4 teaspoons of salt have been added.

1. First, fry the finely chopped onion in olive oil. Roast it slowly over low heat, about 15 minutes, so that it dissolves but does not brown.

2. Add the roasted onions to the finely chopped carrots and quickly sauté everything together. Then add the chicken slices, garlic and fry again.

3. When the meat is lightly fried, it comes to the type of spice: I use a Provençal spice mix, which contains both thyme, oregano and rosemary. But you can use any pinch.

4. Squeeze the tomato paste over the meat, add the ground red pepper (always over the meat so that it does not heat up in the hot fat when adding other spices) and mix everything well and sauté gently. So much so that the spices embrace the meat.

5. Then immediately add the wine, tomato sauce and enough water to almost cover the meat. I rinse the jar that contained the tomato sauce, and that’s it. Pepper, add salt if desired.

6. Cook the stew covered over low heat for about an hour to make the meat tender and malleable, which, for example, we will not be able to achieve with chicken breast. Do not cook too long so that it does not dry out. 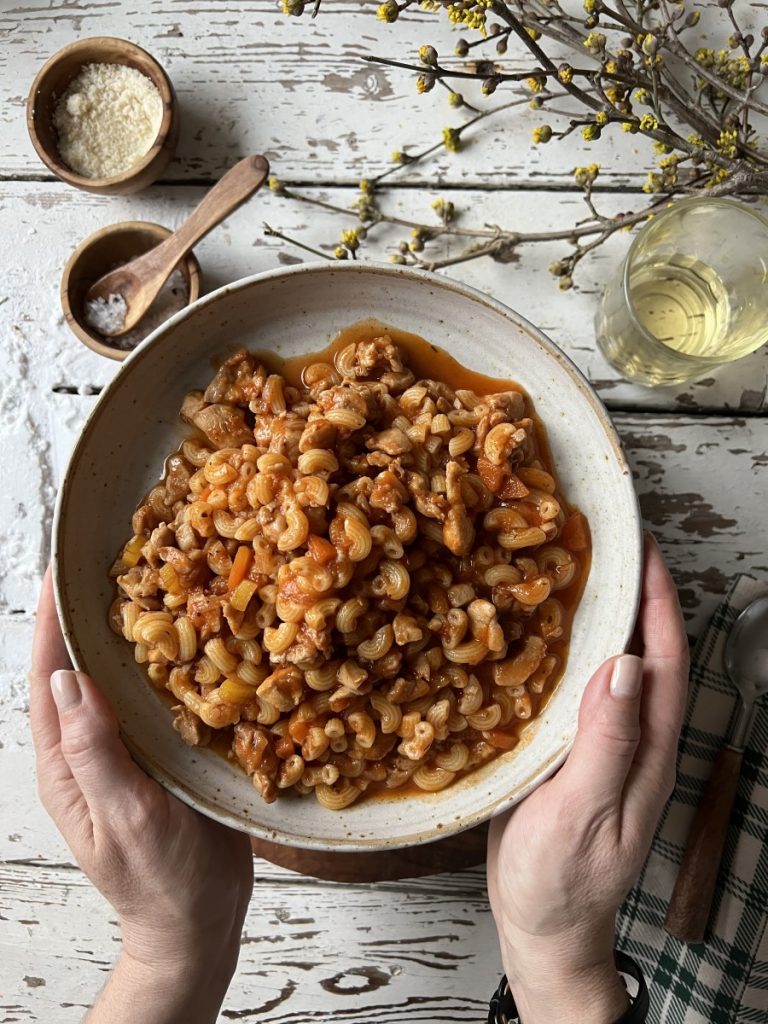 Serve the stew with pasta. We usually see wide noodles. We love mini macaroni so the stew sauce gets stuck in all those holes. So we can cover it with a big spoon.

We also recommend: Menu of the week: quick and inexpensive lunches 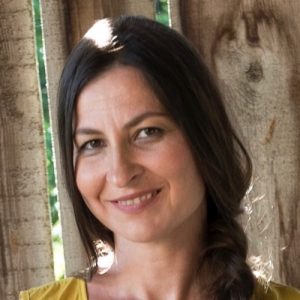 Urška Fartelj, the creator of the blog 220 oblique degrees, is one of the most recognizable and well-known food bloggers in our country. Her strength lies in the fact that she knows how to present everyday dishes in a beautiful, interesting and at the same time skilful way. A man immediately feels better, he becomes the king of his little family table, who knows how to prepare it.