At the heart of Notranjska is the Loka Valley, a varied valley with unspoilt nature and people who are extremely proud of their roots and tradition. At twenty-one in the villages live a little less than four thousand souls with their dialect and their characteristic dishes. There are some that were once prepared all over the valley. Many dishes are still often on the table, and some of them have been forgotten by young housewives, but they will remember the precious book Tastes of the Loka Valley – Culinary Heritage, published by the Association of Women and Girls from Ostrnica Loska dolina. .

Exploring eating habits and preserving culinary richness has been the most visible part of the mission of the Association of Women and Girls from the Rural Area of ​​Ostrnica Loška dolina since the founding of the association thirteen years ago. All these years they carefully collect recipes for dishes from older housewives, write down the preparation procedures, and also take photos of the dishes. Selected dishes have been present for some time in the municipal bulletin Obrh, in order to preserve knowledge about their preparation. Thus, the idea was born to collect the recipes in a book and publish it in the year when Slovenia was called the European gastronomic region.

Sharpeners are an ancient method of drying hay, which has been preserved to this day and gives the Loka Valley a special charm. Country women and girls, linked to the Ostrnice association, also chose the name after this landscape specialty.

“We started collecting revenue in February 2021 and have invested a lot of time, knowledge and effort in the preparation,” said Ana Zakrajšek, long-time president of the Ostrnice association, during the official presentation of the Tastes of the Loka Valley book. “All members of the association were invited to collect recipes, and sixteen of them participated in the preparation of the dish. Each brought their own pebble into the kitchen mosaic of the Loka Valley. All dishes are also photographed and presented with short curiosities: when and how they were prepared. Many recipes have not been written down until now and have been passed down in families and between generations by oral tradition, so the work they have done in the Society is truly invaluable for all subsequent generations. . 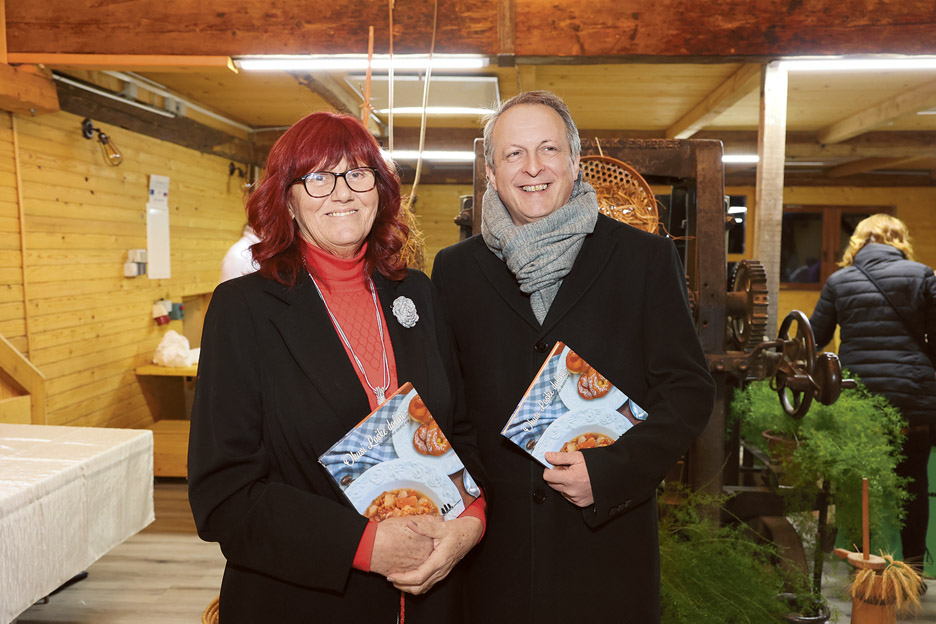 Ana Zakrajšek, president of the association and initiator of the book, with the book editor Borut Kraševac

In addition to traditional dishes from the Loka Valley, some recipes for dishes brought to this valley by girls who came here from nearby Croatian settlements also found their way into the book. This is how Easter treats came to Loka Valley budl and potato bun.

The book took much longer than the society members imagined, as they expanded its core content with recipes by researching individual dishes, a chapter on homemaking courses in the Loka Valley, and a dictionary of ancient words and dialects related to the cuisine and the dishes presented. in the book.

EAT MODEST, BUT TASTY
Flipping through the book, many older locals have a sense of nostalgia, and memories of their childhood and the dishes prepared by their mothers and grandmothers come to the surface. These were simple dishes prepared from ingredients that were then available in the field, the garden or in the pantry of the house. “The inhabitants depended mainly on what they produced themselves: kohlrabi, potatoes, beans, cabbage, corn, buckwheat and cereals, and fruits from the vegetable garden: apples, pears and plums. These are crops that resist frost well and thrive in the places of the Loka Valley and are the basic ingredients of the dishes presented in the book,” wrote its editor Borut Kraševec in his introductory speech. 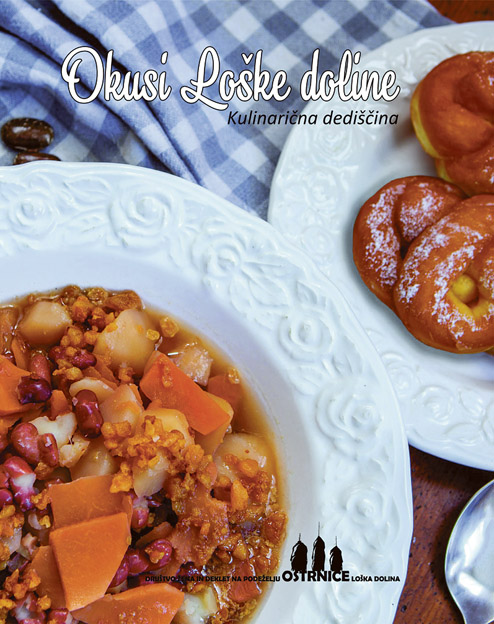 Most often, housewives prepare stews: kauro, ješprenj, porbiks (bean stew), and strong dishes: žganci, močnike and porridge… Although these are modest dishes with few ingredients, they are extremely tasty and satisfy many people at the same time. hungry mouths at the table.

“The most typical dish of the Loka Valley is kaura, so the recipe is the first in the book, and it also adorns the cover of the book,” Zakrajškova said during the book presentation. It is prepared from just three ingredients: kaura, as yellow kohlrabi is called in the Loka Valley, potatoes and beans. “These were ingredients that were available almost all year round. It was even better when it was richly recorded with crackling,” the president added. She was a housewife prepared in a large pot, which was placed in a cauldron bread oven even before going to the field. When they after something hours back from fieldwork, the kaura was cooked and lunch for family on the table.

Meat dishes were rarely prepared – on holidays and specials Opportunities. Meat was only eaten a little more when it was there were many dormice in the forests there, and there are many caught. If they had enough food in the forest in autumn – acorns, there were dormice many and the dormice were able to catch more than one in one night hundred. Their meat was an important part of the locals’ diet.

SWEET AND FESTIVE DISHES
The book says that there were generally few sweets and festive dishes: very numerous and varied were the versions according tocenturies-old sweet dishes. In their preparation, the housewives were above all creative and imaginative.

Because every house in the Loka Valley also had a garden, they call it that orchard, they had a lot of apples and pears. Some fruits were dried, from it they cooked pears or shkundrov (from dried apples breadcrumbs) compote. Pear and shkundr “water” is special enjoyed farm chores in the summer heat.

Only on holidays and special occasions did kitchens smell after sweet: potica, tašcah (flancati), baked for Christmas also župn’k and pigeons. As in all Slovenian regions also in the Loka valley had a special place potica, which was and the pride of every housewife remains. She was at the table at Christmas, for Easter, blessings and weddings. Today they are richly padded, but sometimes the fillings were more modest. They stuffed him many times with carnations or raisins as with nuts, as was the case for many too expensive. “The grasshoppers, however, always ended up in the goblet they had continued to Saint-Nicolas. “

The last recipe in the book is a recipe for župn’k, ritual bread which patiently waiting at the festive table since the first holy evening (Christmas Eve) to the Holy Magi. It is prepared from richer leavened dough, the edge of which is decorated with mastic, on in the middle a maximum of three open-beaked pigeons squat, yes at midnight they sing and announce the birth of Christ. Župn’k so cut and divided among the members of the family into three holy kings. All the animals in the house have it too. But the children are older they said they would grow to a thick lump in a year the priest they got,” said the president of the association Ana Zakrajšek, who is also a bearer of the intangible heritage of the preparation supporter of the housewives of the Loka Valley and Babno Polje.

The presentation of the book was also enriched by musical performances and humorous scenes from the life of a peasant family and work on a farm. So the members of the society played how nice it was to socialize servant and neighbors by undressing the corn. They sang together, told stories and jokes. But once the job was done, they did enriched with delicacies prepared by the housewives. Never there was no shortage of povaunca or crispy bread, which many ate only on this occasion. Those gathered were also greeted by guests, honey Irena Ule and Slavica, President of the Association of Slovenian Farmers
Smrdel, a culinary expert who wrote something words of encouragement in the introduction to the book. His result was supported by many donors, including the municipality of Loška dolina and the public institution Snowman.

Dr. Janez Bogataj, ethnologist, on the book Tastes of the Loka Valley: “Sincere congratulations to all those quoted in the colophon. Book it’s a very good surprise and at the same time a model for others the environment of Slovenia, how to preserve the historical memory of in the field of food cultural heritage. I am very happy that you are also included in the book some special features, such as porbix. Oh Janez Trdina already mentions this dish in his notes, where he talks about our forest workers (called Croats) in the forests of Slavonia. Each dish in your book tells its own story. Special value the book is also a glossary of ancient words and dialect expressions. so again once all congratulations and much success in discovering your culture heritage of tomorrow. »

First shake the beans in a bowl, add a layer to the flakes sliced ​​kaura and a layer of diced potatoes. It is desirable to use at least two types of potatoes: one, boil a little and the dish thickens, and the other that remains in rooms. Then pour the ingredients with water, salt and cook over medium heat for at least two hours. before the cow offer it, cover it with cracklings.